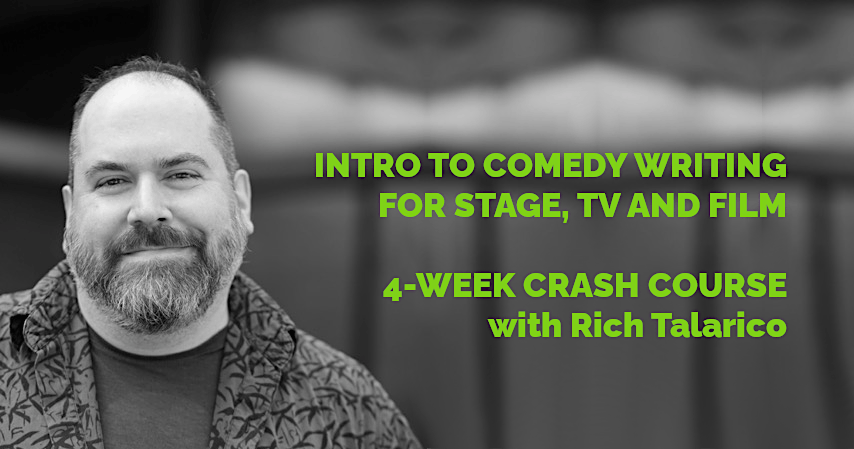 Rich shares insights and writing techniques from his 20+ years in late night TV (SNL, MADtv, Key & Peele, The Tonight Show) and from having written five resident company shows for Second City in Chicago.

Students will learn how to write jokes, how to write blackouts, how to brainstorm and pitch their ideas and how to outline a scene. How to tell a story. How to properly format and write their scenes. How to come up with endings.

The group will also learn how to support others’ ideas a key writers’ room skill.

"Rich knows how to write sketches -- that much is obvious. But it was clear that he loves helping people get better too. . . I have never had a sketch class that helps people so much with how to think about comedy. Don't wait to find a better sketch class. It might not come along."

"I seriously don't think I've had the chance to absorb that much good content in a small amount of time ever... even in college!"

About the Instructor: Rich Talarico is a Peabody Award winning and four-time Emmy nominated writer and producer best known for his work on Comedy Central’s Key & Peele. Rich has also written/produced Review for Comedy Central, FOX’s MADtv, NBC’s Saturday Night Live as well as The Tonight Show with Jay Leno. Rich produced and wrote Frank TV for TBS and was a writer/performer on The Sketch Pad for HBO. Rich did script punch-ups on Tina Fey’s Mean Girls and Jordan Peele's Get Out. Rich's most recent feature film script, The Widow Daredevil, was named an official selection of the prestigious 2020 Beverly Hills Film Festival. Rich took his first improv class from Stephen Colbert at Chicago’s Second City in 1992 and then went on the road with Second City’s National Touring Company. He later co-created five original sketch comedy revues with Second City's Etc. and Main Stage Companies. While in Chicago, Rich was involved at Improv Olympic (now iO) under the direction of Charna Halpern and the late, Del Close. Rich played on iO house teams, Mr. Blonde and Faulty Wiring. Co-created the shows Trio, Dasariski, Strap Heads, Close Quarters and performed with the early casts of Chicago’s longest running improv show: "The Armando Diaz Experience, Theatrical Movement and Hootenanny." Rich has appeared in featured roles on MADtv, Late Night with Conan O’Brien and the feature film, High Fidelity. Rich has appeared in several TV commercials, most notably A&W Rootbeer’s “Mr. Dumass.”

Sea Tea Comedy Theater requires proof of vaccination to enter. Vaccine cards will be checked at the box office; photos of your card will be accepted.

Masks are also required unless eating or drinking. All performers and staff are fully vaccinated. As always, if you are feeling sick, we will exchange or refund your tickets at no cost.

Sea Tea Improv is committed to keeping you safe, and we highly recommend that you keep a photo of your vaccine card on your smartphone so you'll always have it with you. Thank you for working together to keep our community healthy and safe.